Guru Purnima is celebrated on Sunday 9th July in 2017. According to Telugu Calender Guru Purnima occurs in Ashadha month Full Moon day Shukla Paksha, Bright lunar fortnight is known as Guru Purnima day. According to English Calender Guru Purnima occurs in July. Guru refers to spiritual guide who enlighten disciples by his knowledge and teachings. Guru Purnima is also celebrated by Buddhists in the honor of Gautama Buddha. Because Gautama Buddha gave His first sermon to Five Monks called the Dhammacakkappavattana Sutta, on this day at Sarnath, Uttar Pradesh, India. While Hindus celebrate it in the honor of the great sage Vyasa. The word Guru is derived from two words, 'Gu' and 'Ru'. The Sanskrit root "Gu" means darkness or ignorance. "Ru" denotes the remover of that darkness. Guru means one who removes darkness from ones life. Guru Poornima is a time for all sincere spiritual seekers to remember their spiritual purpose and rededicate themselves. 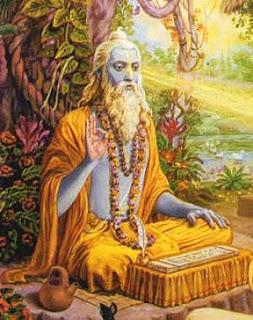 Guru Purnima is also known as Vyasa Purnima and this day is celebrated as birth aniversary of Veda Vyasa. Legend Vyasa divided the Veda into four namely Rigvedam, Yajurvedam, Samavedam and Atharvavedam. According to Brahmanda Purana Vyasa Maharshi is the guru of all gurus.
Vyasa Puja is held at various temples, where floral offerings and symbolic gifts are given away in his honor and the festivities are usually followed by feast. Guru Purnima is also observed in Jainism as it is marked special veneration to one's Gurus and teachers.

The Mantra that chant on this day is

On the occasion of Guru Purnima Lord Saibaba is worshipped mostly. On this day Lord Sai temples will be conducting the special pooja and bhajan programmes will be offered and annadanam also done in some temples.

The Significance Of Guru Purnima is connection with the guru tattwa or element. The guru tattwa is power, not a person and guru is power.  Guru Purnima Observed for enlighten the life. It is better to light one little candle in the darkness of our own heart than to search for the light outside. Guru Poornima is called the day of the Master but it is actually the day of the Devotee. Guru Poornima is New Year for spiritual seeker. Guru Purnima is about respecting guru's. Gurus are believed by many to be the most necessary part of lives. Guru also called as Teacher, Aacharya and Professor.