Bhadra month is an important month in the Hindu calendar. Bhadrapada Purnima is celebrated on 30 September 2012. Bhadrapad Purnima is dedicated to Lord Satyanarayana. Donating food, clothes to Brahmanas is considered sacred on this day. Lord Ganesha is worshipped during this month. The day of Purnima is the day (Tithi) in each month in which the full moon occurs. 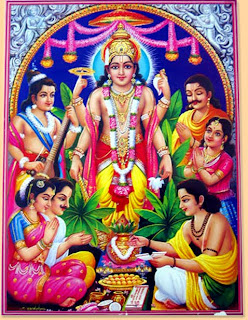 In the auspious day of Bhadrapad Purnima Lord Satyanarayana vart is done. For the vrat there is little cost only do prasad with wheat flour, sugar and if possible fruits will make up the prasad. And a brahmin needed to tell the satyanarayana katha. Five stories are connected with this Vrata. They speak about the glory of Lord Narayana and His Grace. coconuts should be five as every katha is finished the coconut should be broken. The pournami occurs are