Anant Chaturdashi is celebrated on Chaturdashi of Shukla Paksha in the Bhadrapada month. Anant Chaturdashi is on 29 september in 2012. Anant Chaturdashi will be celebrated on the last day of Ganesh Chaturthi.  Lord Vishnu is worshipped on this day. It is believed that people who have lost their wealth, glory, respect etc due to any reason, with full respect and belief, tie the holy thread of Lord Ananta. Ganesh nimarjanam will be done on this day. Ganesh idols brought into homes and communities are immersed in to the sea and rivers. On this day, people travel to the waterfront with the idols, large and small, dancing and singing in large processions. Lord Ganesha is departed, only to be welcomed the next year with equal excitement. 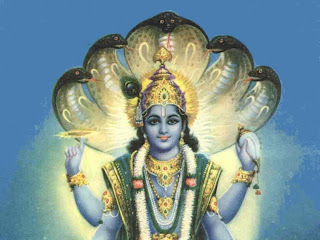 On the auspious day of Anant Chaturdashi The person observing Ekadashi has to wake up early in the morning and has to perform the necessary routine activities place a Mandap on a wooden seat. Place a statue of lord Vishnu and Sesh Naga on the five grains of rice and Kusha grass. A thread is coloured with turmeric and 14 knots (symbolizing Lord Anant is wrapped on a cucumber and is swirled five times in this Ocean of Milk) are tied into it. It is kept in front of the statue of lord Vishnu. The 14 knots of Anant are the symbol of 14 lokas. Fourteen tilaks (small vertical strips) of vermilion (Kumkum) are made on a wooden plank. A bowl containing Panchamrit (made of Milk, Curd, Jaggery, Honey and Ghee) symbolizing kshirsagar (Ocean of Milk) is placed on this wooden plank. Later this Anant thread is tied on the right arm above the elbow by men. Women tie this on their left arm. This Anant thread is removed after fourteen days. devotees perform the Anant Chaturdashi vrat for 14 days. Anant Chaturdashi vrat is done for 14 years for prosperity, wealth, happiness. The Mantra chanted on this day is