Makara Sankranti is observed on Monday 14 January. In India, Makar Sankranti is a Major harvest Festival. It is one of the few Hindu Indian festivals which are celebrated on a fixed date it varies between three days 13,14 and 15 of January every year. All across North and West India, flying kites and feasting on rice and sweets made from sesame seeds is an integral part of the festivities. Sankrathi is celebrated for Three days. Bhogi, Makara Sankranti or Sankranti, Kanuma. Bhogi is the starting of Festival. Makara Sankrathi Is a Festival Of God Sun and The Sun stands for knowledge, spiritual light and wisdom. 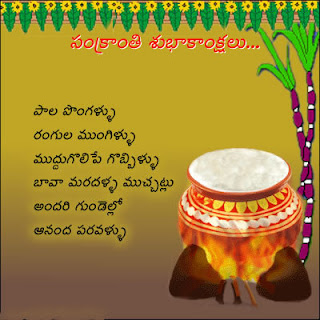 On the Occasation Of Makara Sankranti people wakeup early and finish their regular activities like head bath, cleaning house.

They will buy a new pot and clean and cover with white cement (Sunnam), vermilon (Kumkum), Turmeric (Pasupu) and a thread with a leaf is weared, then pour milk into the pot. The Rangoli design is drawn on the mud or Floor in front of the door. The Rangoli is decorated with various colors. In the middle of rangoli dried cow dung (pidakalu) were placed above this the pot is kepted. After that all around the pot Navadanyalu were placed that includes Gingelly (Nuvvulu), Black Gram (Minumulu), Green Gram (Pesarlu), Bengal Gram (Sanagalu), Corn (Makkalu), Jonnalu, Rice, Ragulu and Alisanthulu. opposite to the pot place a broom stick is cleaned and a new saree is placed, above this goddess statue is placed. The God Statue is cleaned and a white cloth Composed of turmeric is weared, and a chain wearing on the Neck. besides the God a Mirror, Sugarcane, Regipallu, Gedipallu were placed. Then coconut will be broken in front of the God and the dried cow dung is lightned. The milk boiled in the pot put some rice in that and keep looking until the milk flows out. And the sweet is shred with everyone.