Khairatabad has a major road junction of five roads called the Khairatabad circle, among the busiest in Hyderabad city. The largest Lord Ganesh Idol in the world is installed at the Khairtabad State Library during the Ganesh Chaturthi festival and is immersed at Hussein Sagar lake. 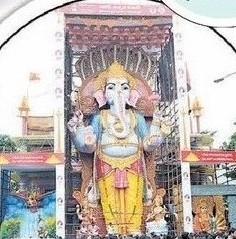 This time they are placing thri shakthi Ganesh. Lord Ganapathi is in standing position 59 feet and right side to Ganesh goddess Lakshmi, left side goddess Saraswathi idols of 10 feet height. Lord Ganesh has six hands top two hands are placing with Ankusam and pasam then the middle two hands have dandam, below two hands one hand is for blessings and other hand for placing laddu. The top of Ganesh idol is placing 5 feet umbrella. Right side of idol 20 feet Gajendra moksham and left side 20 feet goddess Warangal Badrakali were placed.

The laddu is about 5500 kg and it is prepared in tapeswaram. Khairatabad society chairman  Sudarshan and Ganesh idol is preparing Rajendran.