Khairatabad has a major road junction of five roads called the Khairatabad circle, among the busiest in the city. The largest Lord Ganesh Idol in the world is installed at the Khairtabad State Library during the Ganesh chaturthi festival and is immersed at Hussain sagar lake. Khairatabad Ganesh 2012 has got their first puja to Ganesha on 15 June 2012. 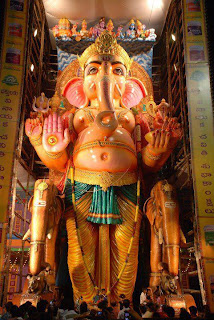 Ganesh festival 2012 is on 17 september. As the idol of lord ganesh is so big and it may be height 55 inches. This time laddu Weight is 3500kgs. The laddu is divided into 5 parts, as one laddu is about 1500kgs, and 4 laddus as 500kgs. This 500kgs laddu will bw distributed in last four daya of the festival.

Ganesh idol was the idea of the Rajendran, pencil art work done by the Girish, computerisation by Sharat, and more others involved in the building the idol.