Bonalu is on Sunday 14th July in 2013. Bonam means rice, rice cooked in a new pot which offered to Mahankali is called Bonam. Bonalu (Telugu: బోనాలు ) is a Hindu festival of the Goddess, Mahankali, celebrated in Telangana and Rayalaseema in India. It is celebrated in the month of Ashada Masam. Bonalu is the Telangana festival. For village Goddess likes Bonam. Bonalu Jatara is a Month long Festival. Goddess Shakti is worshipped as Mahakali or Mahankali.

In festival day people do head bath and wear new clothes especially ladies then they will buy new pot, in new pot they will cook pongali and rice in it, then they will decorate pot with kadi, pasupu (Turmeric) and konkuma (Kumkum) then they will cover the pot with lid, they will make lid as a lamp. This is called Bonam Jyothi. Some women dance with balancing pots, to the rhythmic beats of drums in honour of the local Goddess. In Olden Days people used to sacrifice a buffalo, Goat, Sheep in front of the temple. Goddess temples have names such as Mysamma, Pochamma, Yellamma, Pedamma, Dokkalamma, Ankalamma, Poleramma, Maremma, Pochamme, Maramma, Yellammma, Nookalamma etc. 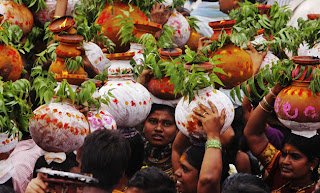 At the centuries-old Ujjaini Mahankali temple, women started filing in from 5 am itself with the 'bonam', ( a pot carrying rice, jaggery, milk and curd and covered with neem leaves and a lamp placed on it ) on their heads.

The origin of the festival is traced to a major plague that killed thousands of people in 1869. At that Time People believed the plague was the result of the anger of the Goddess and started offering Bonalu to calm her anger. The word Bonalu is derived from the Telugu word Bhojanalu means food offered.

Potharaju:
Potharaju, the brother of Mother Goddess, is represented in the procession by a well-built, bare-bodied man, wearing a small tightly draped red dhoti and bells on his ankles, and anointed with turmeric on his body and vermilion on his forehead. He dances according to resounding drums.

The Bonalu celebrations begins first at the Sri Jagadamba temple in Golconda Fort. Ujjain Mahankali Temple in Secunderabad. Then the celebrations will move to the Old City and other areas of the city.