Khairatabad has a major road junction of five roads called the Khairatabad circle, among the busiest in the city. The largest Lord Ganesh Idol in the world is installed at the Khairtabad State Library during the Ganesh chaturthi festival and is immersed at Hussain sagar lake. They started the preparation and given Model Picture on 22nd June 2013. 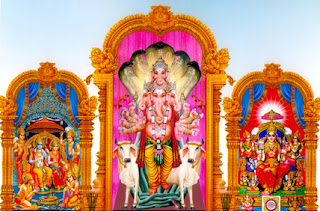 Tapeshwaram Laddu was placed in Ganesh Idol's hand it is of 4000 kgs weight. It is placed with help of crane. On the ocassion of Vinyaka Chaviti Governor Narasimhan has visited the Ganesh with his wife and attend pooja.