Hinduism is a religion with various gods and goddesses. According to Hinduism, three Lords rule the world. Brahma, Vishnu, Shiva. Brahma is creator, Vishnu is preserver and Shiva is destroyer. To preserve the world vishnu appeared in different forms which are kurma avataram, Varaha Avataram, Masta Avataram, Rama Avataram, Krishna Avataram, Narasimha Avataram.

Hinduism is generally regarded as the world's oldest organized religion. Hinduism has grown to become the world's third largest religion, after Christianity and Islam. The Vedas are the primary texts of Hinduism. Vedas are four They are the Rig Veda, Sama Veda, Yajur Veda and Atharva Veda. The deeds in Hinduism are called 'Karma'. Hinduism includes Shaivism, Vaishnavism. Shaivism who belives lord shiva as primary god. Vaishnavism who belives vishnu as primary god. 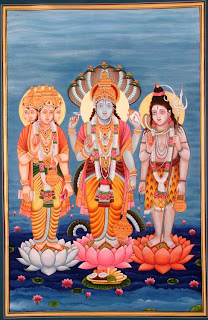 Hinduism teaches that "all religions are the same." Hinduism as an independent religion separate from Buddhism, Jainism. Hinduism says life is cycle of action, reaction, birth, death and rebirth is a continuum called samsaram. It depends on karma that what we did in before life. 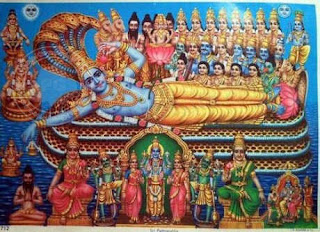 Hindus have many holy places. It includes Badrinath, Tirupathi, Sri Kalahasthi, Vemulavada, Akshardham, Basara, Kasi, Ujjayini Mahankali, Puri Jaganath, Somanatheswaram, Konarc Surya Devalayam, Bhemeswaram, Madhura Meenakshi, Rameswram and so on. Hindus perform their worship through icons such as Vishnu, Brahma, Shiva, or Shakti, depending upon the belives. but god is the Supreme and is only one. Hinduism associates many symbols Swastika, chakra, om. Hinduism has many festivals throughout the year. Hindu festivals starts with ugadi.