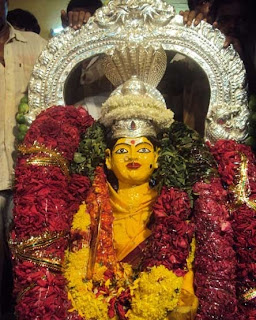 On the auspicious day of Polala Amavasya women wake up early and clean the house then prepare prasadam. This pooja will performed by married women so Poleramma can safe guard their children from the diseases and death. Mostly diseases like Chicken-pox and Small pox. Because of the Rainy season flu like diseases spread easily for children so, women will perform the pooja to protect their children from diseases and prepare prasadams like Thaligalu Paravannam (Rice flour noodles in rich coconut and cashew paste), Billa Kudumulu (Streamed Rice flour chapathi). They offers pooja to poleramma like chanting Shakthi or devi Mantra, Astrotram, 108 names of devi etc "Raksha Thoram" or "Rakstha Daaram"(Sacred Thread) is also Worshipped during the Pooja. Women and Children tie Raksha Daaram in their hands to seek her blessings.

Polala Amavasya is mostly a local festival in Andhra Pradesh and it is also observed in Karnataka, Tamilnadu and Orissa. Polala Amavasya is also known as Pithori Amavasya. Women draw an image of Pochamma at puja place and offer shodashopachar puja to the Goddess. Goddess Poleramma vratam/puja is quite similar to the Goddess Sheetal Saptami puja observed in North India.