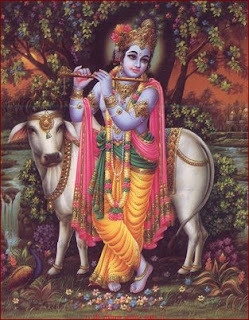 No grains should be consumed during Janmashtami fasting until the fast is broken on next day after Sunrise. Most of the time, Krishna Janmashtami is listed on two consecutive days. The first one is for Smarta Sampradaya and other one is for Vaishanava Sampradaya. International Society for Krishna Consciousness, commonly known as ISKCON is founded on the principles of Vaishnava traditions and most followers of the ISKCON are the followers of Vaishnavism.  Krishna Paksha (dark fortnight) of the month of Bhadrapada (August–September; However, in both traditions it is the same day. So, we have works like Vishnudharmottara Purana saying Krishna Ashtami is in the Bhadrapada month and Skanda Purana stating that it falls in the month of Shravana) in the Hindu calendar. People with small kids make them dress up as little Krishna and Radha. Foot prints were decorated in houses from outside to inside, pooja mandir especially krishna statue will be decorated with flowers. Before the krishna sweets, butter and fruits were offered. In the evening the handi is a clay pot filled with buttermilk that is positioned at a convenient height prior to the event. Then one by one man is stands like pyramid the topmost person on the human pyramid tries to break the handi by hitting it with a blunt object. This is a symbol of unity.