Bhadrapada Purnima is celebrated on Thursday 19th September 2013. Bhadra month is an important month in the Hindu calendar. Bhadrapad Purnima is dedicated to Lord Satyanarayana. The day of Purnima is the day (Tithi) in each month in which the full moon occurs. Purnima is also spelled as pournami, punnami, Poornima and Punnima. Bhadrapada Purnima Shraddha falls one day before Pitru Paksha or Mahalaya Paksha. Lord Ganesha is worshipped during this month. Bhadrapad Month the Important festivals will be started from this month ex: Ganesh Chaturthi. Lord Ganesh likes the Bhadrapad Month. Goddess Laxmi, Lord Shiva and Lord Vishu also worshiped mostly in this month. Donating food, clothes to Brahmins and poor people is considered sacred on this day. 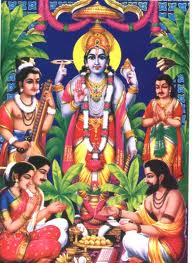 In the auspicious day of Bhadrapad Purnima Lord Satyanarayana vart is done. For the vrat there is little cost only do prasad mixing the wheat flour and sugar then add pieces of Banana will make up the prasad. Panchamrit is made with Milk, Honey, Curd, ganga jal or water, tulsi and Fruits like Banana, Apple, Pomegranate and Goa. Any one fruit will be enough if we want more add other fruits also. And a brahmin needed to tell the satyanarayana katha. Five stories are connected with this Vrata. They speak about the glory of Lord Narayana and His Grace. coconuts should be five as every katha is finished the coconut should be broken. On the day of Bhadrapad Purnima, Lord Vishnu is worshipped. The pournami occurs are